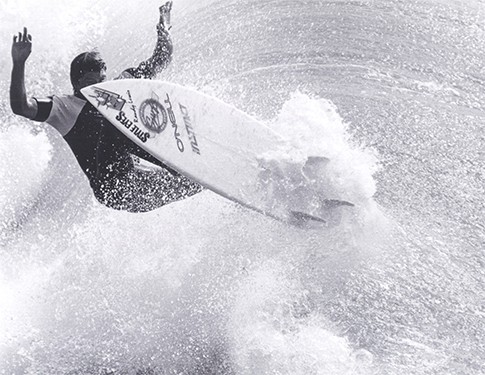 One of America’s top domestic pro competitors during the 1980s, Bud Llamas was Huntington Beach’s most exciting surfer during that era. He won the inaugural National Scholastic Surfing Association (N.S.S.A.) championships in 1978 and backed it up the following year, scalping eight of 10 N.S.S.A. contests to retain his title.

Llamas turned pro in 1980 and won the California Stubbies Trials and became the 1982 Body Glove Grand Prize tour champion. Despite his success on home soil, his international competitive career never really got off the ground. However, his innovative surfing at his Huntington Beach pier homebreak set the early tone for modern day aerial surfing. Llamas has been featured on the covers of both Surfing and Surfer magazines.