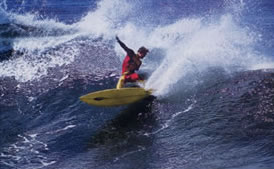 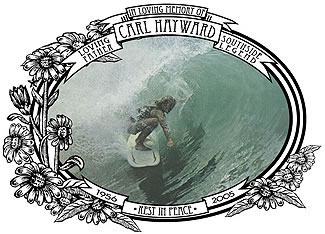 Standing at an imposing 6’4” with a tremendous wingspan, Carl Hayward was a dominant force in the lineup at the Huntington Pier during the 1970s. A master tuberider, his penchant for riding the rocket fish design would became his calling card both as a shaper and a surfer.

Hayward moved to Huntington Beach from Providence, Rhode Island with his recently divorced mother at the age of 13. Although his ascension into the tight-knit group of southside locals was difficult, he quickly became one of the best young surfers in H.B.

His interest in surfboard design developed early and he enjoyed telling his family the story of how his stepfather handed him $25 and told him to “go figure out what you want to do with your life.” Hayward used the money to buy a surfboard blank and built the board from scratch. Shaping would become a passion that he carried forth for the rest of his life. And for over a decade and a half, it was a business as well.

After graduating from Edison High in 1974, Hayward began shaping for Infinity Surfboards and eventually Wayne Brown Surfboards. From 1979 to 1988, he ran Carl Hayward Surfboards from three different locations on Main Street and it was here that he refined his rocket fish shapes — the design for which he is most known for.

He also coached the Marina High School surf team, which included Gary Clisby and Scott Farnsworth — who remember Hayward as a mentor and role model. (Farnsworth went on to win the 1984 World Amateur Championships riding a Hayward-shaped board.)

After relocating his shop to San Clemente in 1989, he closed his doors in 1991 and began working for long-time friend Bob Hurley, first with Billabong U.S.A. and then at Hurley International. Hayward passed in January of 2005 from a brain aneurism he suffered while surfing at his beloved southside of the Huntington Pier.