It is the surfer formerly known as Gaye Chips and Gayle Chips Bowen, and it was a pleasure to be an active competing part of the Hole In The Wall Gang from the later 1970’s to about 1984 (or so).  I do not remember the dates exactly.

I do remember that most of my surfing friends were part of the group of highly competitive but extremely fun and funny surfers.   I remember Butch Cash would be out surfing at the Huntington cliffs and always would ask me when I was going to get involved in contests.  I was extremely shy and the thought of surfing in front of a crowd was too scary for me to even think about back then.  Even in the later years when I was surfing I would always hide when I saw a camera.  Now I kick myself for that.  I have very little evidence of my surfing days on film.

Butch had a lot of faith in me and was Director of District 5 for The Western Surfing Association.  He kept telling me I could be a top ranked amateur.  I thought he was just being nice.  Eventually I got involved in surfing contests.  Butch was very persistant.

Before joining the HITWG I surfed for Infinity Surfboards.  Steve and Barrie Boehne are two of the most incredible people around.  Barrie had no fear when tandem surfing with Steve.  They introduced me to that part of surfing, but I just did that as a stand in partner for some of the stronger guys when their super light weight girls were not around.  Barrie and I would take trips to San Onofre or Tressles and it was always fun going surfing with her.

I surfed with Clyde Beatty for a number of years, and started winning contests on his boards.  I was the female test rider for the Rocket Fish, and I loved that style of board. Clyde and I traveled to several contests all over California, and my surfing really improved by watching his style. 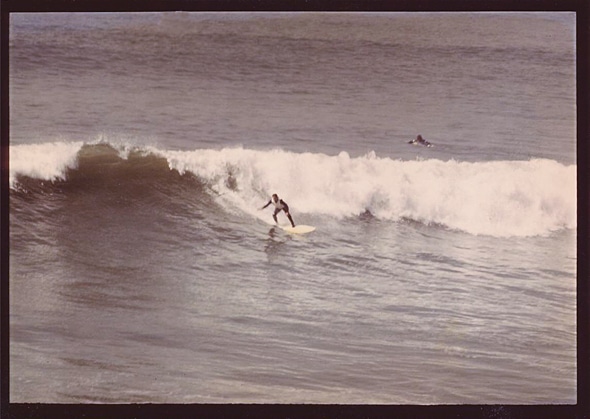 Let’s see, what else.  Before even entering contests I was learning how to judge them.  I remember Larry Moore was teaching me to be a spotter/recorder before he became a famous photographer.  I also had help learning how to judge from a lot of the top surfers of that time.  Remember Bruce Gabrielson?  Dr. Bruce, now.

I judged a lot of amateur contests, and worked my way into being one of the first women pro surfing judges.  Some say I was the first, but that is debatable now, I suppose.  I judged professionally for Nancy Katin, and the ASP, Long Beach City College, some high schools, and where ever I was asked.

It was in 1976 that life changed.  I had an offer to go to Hawaii and surf pro contests.  I had been the top ranked WSA 3A surfer for over a year at that time.  At that time I took sponsorship with a company that had links to both Hawaii and California.  I also was sponsored by my friend Nancy Katin, Kanvas By Katin, and Body Glove (it was still owned by Bill and Bob Mistral).  They promised me a lot to move over there, but unfortunately or fortunately none of it worked.  While I was there, the board manufacturer’s shop caught on fire, and he did not have insurance, so I was without a  main sponsor.  The girls I would be competing with voted that I could not surf in their contests until I lived there for Five Years!  Things were not always easy to get into Pro Surfing. ( I did get to know Rell Sun better when I was there, and may she RIP, I will always love her Aloha spirit and how welcome she made me feel in Hawaii.)

The Hole In The Wall Gang showed up in Hawaii, and the competition was very keen.  The Hawaiian’s did not want any Mainlanders to capture the Team Trophy.  I am not sure if I was officially surfing for them then, but I know I was hanging out with them during their stay in Hawaii, and it was breaking my heart each time I had to say good bye to them as they either left for the airport, or I shuttled them there.

I know that Hawaii contest introduced the Hole In The Wall Gang to the world as a fun loving force to be reckoned with.  I also do not know if they won the Team Trophy, but I know if they did not it had to be close.  So close that the Hawaiian Beach Boys and famous surfers like Rabbit Kakai, and Ben Aipa were getting their tandem boards for everyone in their team to ride as the swell was getting into Negative Height.  It was who could catch the best Ala Moana chops and stand up the longest.

I am not sure if I was officially surfing for them then, but I know I was hanging out with them during their stay in Hawaii, and it was breaking my heart each time I had to say good bye to them as they either left for the airport, or I shuttled them there.
Everyone was saying, “Come home, you belong with us.”   I could not say no, so moved back to California and the cold water.

Bob Carbonell, Butch Cash, and Hugh Murphy were some of my closest surfing friends and on the Board of Directors for the Western Surfing Association for several years.  They were active with the “Gang” and wherever they went I went.  I had Gordie shape my first board as a team rider, and then later Randy Lewis became my favorite shaper.  Randy had his Bicentennial Board that was a 9’6” and rode like a 6’6” board.  I used to stop at either Gordie’s shop or Randy’s shop to see if they had any secret weapons (nickname for Randy’s boards) that I could borrow.  I still wonder what happened to that Bicentennial secret weapon.  It was so nice to have friends who would loan you different boards to try out like that.

Carbie, Butch, and Hugh were very active in the Western Surfing Association, and they made sure I was, too.  I was Corresponding Secretary for a few years.  I helped organize several contests with them, and remember setting them up, and either helping to tally the scores or judging the contests.  I believe all three of served terms as President of the WAS, and District 5 Directors.
One thing about surfing is that no matter where you live, it is always with you.  I will never forget the years surfing the Huntington Pier, The Cliffs, and traveling all over the state for contests.  Being a part of the HITWG was one of the highlights of my life.  It was always fun to be around them.  There was a feeling of brotherhood, and sisterhood among us.  Everyone always had a story to tell, and usually the endings had you crying with laughter.

Even though a lot have gone on from this live, I am sure that they will never be forgotten thanks to the honor the Walk of Fame is so graciously bestowing on us.  I have so many good memories, that often I find myself laughing when I recall one of them, and people staring at me.  It is too bad, I am still pretty shy, so get embarrassed. 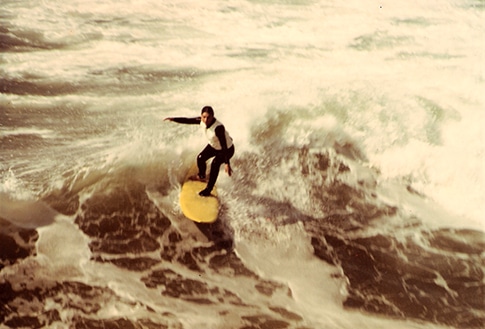