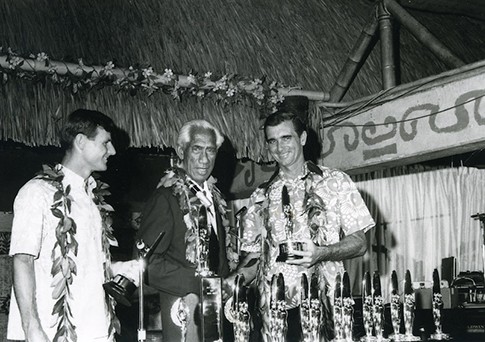 After being taken under the wing of legendary Hot Curl redwood surfboard rider Wally Froiseth during World War II, George Downing became a true student of the sport. A tall and slender Hawaiian, Downing was one of the early big wave pioneers in Hawaii during the 1940s and 1950s. He shared his skills and the knowledge of his ancestors with everyone he met.

Downing is credited with being the first surfer to develop a subtle quiver and the first removable fin system. He also created the first real big-wave gun in 1951.

His sessions at Makaha, sent around the world via the Associated Press Newswire, inspired many of the first wave of Californians to make their annual winter pilgrimage to the North Shore. Downing won the prestigious Makaha International three times (1954, 1961, 1965). He later used his skills and leadership as the executive director of the Quiksilver In Memory of Eddie Aikau event held in large surf at Waimea Bay. His eldest son Keone Downing won the Eddie event in 1990.

Downing passed away in 2018, but not before creating a lifetime of legacies for the sport he loved deeply.