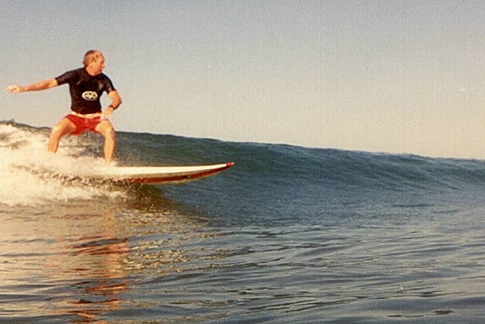 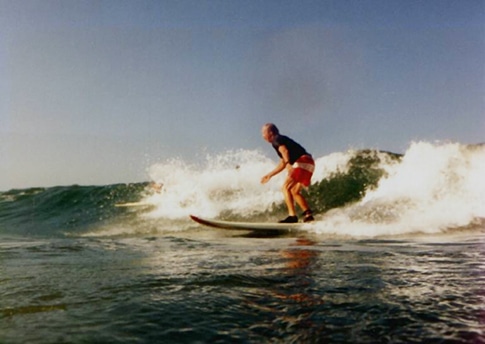 George Jennings Lambert Jr. was born on September 12, 1942 In Long Beach California. He grew up in Artesia/ Lakewood California and graduated from Artesia High School in 1960. He Married Sherry Coffman in 1960 and they had three children between 1962 and 1965 Michele, Michon and George III.

George was in the Coast Guard from 1960-1964 and was stationed in Seattle and did two Bearing Sea Patrols as well as Arctic Operations in Alaska.  Upon his return to Southern California he supported his young and growing family by working 3 jobs and attending school to become a Sheet Metal Worker. In 1965 while driving his youngest brother Floyd and two of Floyd’s friends Ted Lancaster and Bobby Pinero, to the beach to surf.  George decided “why not” and gave surfing a try, he was immediately hooked.

Surfing was a great (and cheap) sport and a fun diversion for the entire family. On weekends the family of 5 would pile into the small Volkswagen Fastback (Later it was a Volkswagen Van) and head to the beach. Although the girls were happy to play in the water and on the beach, it was George III who would take to surfing at age 3 ½. At that time they did not make surfboards small enough for the miniature surfer so George had one specially made for George III. He also had a bright orange helmet custom made to prevent George III from getting  hurt and so that his mom Sherry could pick the little boy out of the lineup.

As George advanced in his career he purchased an old green surf van affectionately called the “Wombat”, and upon his return to home from work each summer evening would take his Kids as well as any neighborhood kids (and there were quite a few!) down to surf glass off at the Seal Beach River Jetty.

On the weekends George would take his three kids down to the Huntington Cliffs (Sherry needed the break) and would go out surfing with George III while the girls Played on the beach. Upon his return from the water he would be met by Doll, who had a Catering truck at the cliffs who would tell him how much he owed her for all of the hot Chocolate and doughnuts his three children had consumed!

George began working with the District 5 WSA , when George III began competing in surf Contests. In 1980 he began managing the Katin Pro Am at Nancy Katins request. George Managed the contest for 7 years until 1987 and had a fabulous time! He attributes most of the fun and credit to the crew he had created to work with that included:

George continues to surf and his entire family enjoys at least one annual surf camp trip per year where he can be seen in the water with his son George III and most of his six grandchildren :Robert (Mad Dog), Bradley (Boo Boo), Matthew (Rude Dude), Ashlyn (Little Doll), Mia (Little Princess) and Max Jennings (Bubba) at glass off in San Elijo.