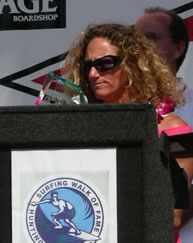 With a nickname like "Danger Woman,” it’s of little surprise that Kim Hamrock's reputation as a fearless surfer precedes her. She was born in 1960 in Whittier, California, but didn’t start surfing regularly until the age of 16. She eventually earned her chops by surfing Huntington and Trestles during the 1970s, an age when female surfers were somewhat rare and often discouraged by Southern California's notoriously misogynistic lineups.

By the mid-‘90s, the lean goofyfooter held six U.S. titles (four shortboards, 1993-96; two longboard, 1995-96). After turning pro in longboarding in 1998, Hamrock placed third in the 1999 Women's Longboard World Championships, fifth in 2000 and was crowned Women's Longboard World Champion in 2002. She went on to charge larger surf well into her 40s and earned a runner up at the 2005 XXL Big Wave Awards. More recently, Hamrock published a book about surfing entitled My Grandma Surfs Better Than You. 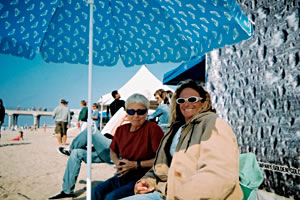 PHOTO" Kim with Linda Benson, 1997 Walk of
Fame Woman of the Year inductee. 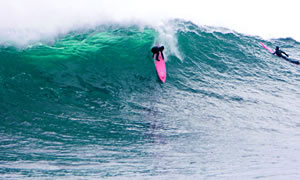 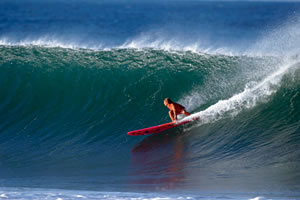