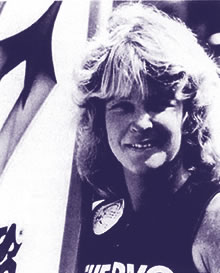 Hawaiian surf is generally where top surfers make their lasting impact. And in a sport heavily weighted down by male egos, when a woman proves her worth in the North Shore’s waters people take notice. And just like that, Lynne Boyer took women’s surfing in the late ’70s to new heights.

Hailing from Haleiwa, Hawaii, Boyer’s rise to greatness came from her reputation in the juicy surf. Her low stance and rail surfing drew instant comparisons to a female Larry Bertlemann – the eye-catching Hawaiian who redefined hotdog surfing in the ’70s. She proved a worthy rival for longtime dominator of women’s surfing Margo Oberg. Beginning in 1977, the two were constantly in the running for the ratings lead of newly-established women’s world tour. Boyer and Oberg traded off world titles, with Boyer winning in 1978 and 1979, while Oberg took 1977 and 1980. “You could say she was a more radical surfer than I was,” Oberg said of her rival.

Born in 1956 in Allentown, Pennsylvania, raised in Maryland, Boyer began surfing at age 11 when the family moved to Hawaii in 1968 – the same year Oberg won her first world title. Boyer’s rise to greatness began when she placed third in the 1973 state championships and won it in 1975. After high school she turned pro, flew to California and won the Hang Ten Pro Championships at Malibu in 1976, before settling onto the women’s tour. After two titles and numerous years in the top eight, Boyer quit the tour in 1985, admitting to a drug and alcohol problem. She continued to surf, but revealed in 1997 that, “It took 13 years of being sober to make it fun again.”

She still resides in Hawaii and has embraced her second love in life – painting. Although she enjoyed sketching and drawing throughout her entire life, Boyer chose surfing over art in her early years. Now her choice medium is oil on canvas, and her realism includes the mesmerizing landscapes and seascapes of Hawaii. 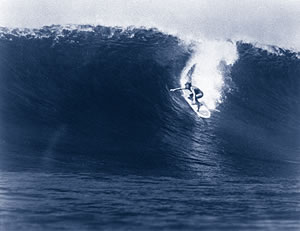 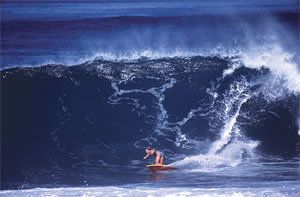 PHOTO: Lynne was known for her aggressive attack on the large wave faces of Sunset and Haleiwa.