Champion of the 1958 Makaha International Title 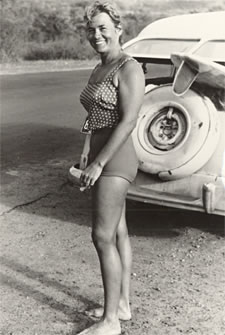 Born in Hollywood California, Marge Calhoun was first exposed to surfing during family weekends spent at Venice and Santa Monica beaches in the 1930s and 1940s. A competitive swimmer and diver, Calhoun trained for the 1940 Olympics until the games were cancelled due to the outbreak of World War II.

Calhoun began surfing Topanga Canyon in the 1950s, riding boards given to her as a Christmas gift by her husband. Along with her two surfing daughters, she was an inspiration to a generation of young women who aspired to surf despite being stigmatized by a heavily chauvinistic, 1960s-era surf culture. Calhoun was also a co-founder of the U.S. Surfing Association, an influential surfing organization of the 1960s.

Most notably, she captured the 1958 Makaha International title riding a 10-foot Velzy balsa, a board she owned up until her death in 2017 at the age of 93.