Paving the way for Florida women to achieve greatness

The state of Florida has produced tremendous female talent with the likes of four-time World Champions Frieda Zamba and Lisa Anderson. But before these standouts could even stand up, first came Mimi Munro.

Munro was born in Daytona Beach, Florida in 1952 and began surfing in Anderson’s hometown of Ormond Beach at age 10. She was the 1964 Florida State Champion at age 12 and won the East Coast Surfing Championships in 1965 and 1966. As the first East Coaster to surf in an international competition, Munro took third in the 1966 World Surfing Championships at a mere 14 years old.

Despite a childhood fear of big surf, her quick feet and flawless balance branded her as the best female noserider in the world. However, by 1968 she was tired of being teased at school for being a tomboy and quit surfing. Meanwhile, two decades later Zamba and Anderson carried the torch for Florida women while Munro raised her four kids.

It wasn’t until age 40 that Munro began dreaming of surfing again and picked up a longboard. In 1996, Munro was inducted into the East Coast Surfing Hall of Fame. At age 49, she won the women’s pro longboard division at the Cocoa Beach Easter Surfing Festival. Munro continued to compete and won notable East Coast events such as the 2003 Betty Series Finals in Florida and the 2006 East Coast Wahines Championships in North Carolina. She continues to influence young women surfers by teaching at surf camps in Florida. 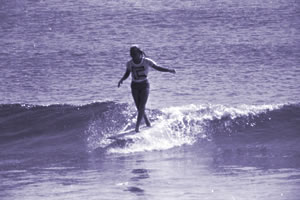 PHOTO: Mimi at home on the East Coast shows classic longboard style of the ’60s with the forgotten art of the cross-step. 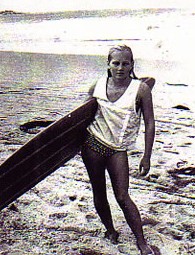 PHOTO: As a 14 year old, Mimi – shown here coming out of the water – finished third in the World Championships in San Diego behind inaugural Woman of the Year inductee Joyce Hoffman.