One of the creators of the classic California surfing style 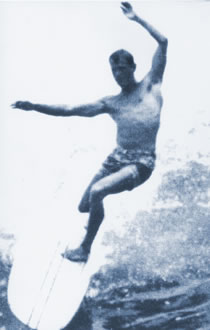 Credited with changing the surfing style of an entire generation, Phil Edwards ushered in the more functional style of smooth, graceful moves and knee-drop turning that has since become known as the classical California surfing style.

Edwards is largely credited as being the first person to ride Pipeline on Oahu's North Shore during the early 1960s. He’s also regarded as one of the most noteworthy boardbuilders of his era and beyond.

Edward’s introduction to surfing was rather matter of fact. He was an avid model boat-builder and his half-brother built him a paddleboard so he could chase his model boats around Los Alamitos Bay.

In fact, a great portion of his professional career was spent building catamarans for Hobie, though he had never actually owned one until 1996.

Edwards went on to own a motorboat which he used to pursue his life-long love of scuba diving. He liked the solitude of scuba and compared it to surfing back in the ‘50s and '60s. “The big appeal of surfing for me was the wilderness aspect,” Edwards said. “It used to be, I'd be the only person at Trestles. You'd get a good ride and there would be no one to see it!"