In the water or the office, Farnsworth takes care of business

Coming up in Huntington Beach isn’t necessarily an easy road. During the ’70s and early ’80s there was a serious pecking order in the Pier’s lineup. Scott Farnsworth rose through those ranks and along the way won a World Amateur title, surfed on the pro tour and continues to make a living on the business side of surfing.

Farnsworth grew up in Huntington Beach and began surfing at age six. He made his first pilgrimage to Hawaii’s North Shore at age 16 and charged Pipeline, Sunset Beach and 20-foot Waimea. After rising to the top of the burgeoning N.S.S.A. ranks, Farnsworth, a polished, intelligent surfer at age 19, was selected to the U.S. National Team and competed in the 1984 World Surfing Championships.

Farnsworth went on to win the individual title and helped fuel Team U.S.A. to victory over rivals Australia. He upset event favorite Gary “Kong” Elkerton and beat Simon Law to the surprise of many. The underdog gold medal U.S.A. team was filled with current notable surf industry names such as Richard Woolcott, Janice Aragon, Jeff Booth and Mike Parsons.

Farnsworth’s win also laid down a clear-cut pathway from the ams to the pros. Back then you had to get good grades in order to compete in the N.S.S.A. If you dominated those events and won a National title, you’d get your chance at a professional career. After a stellar N.S.S.A. legacy and the World Amateur Title, Farnsworth went on for a stint on the A.S.P. World Tour.

Once retired from competition, he became brand manager at Oakley before taking the reins as president of On A Mission (OAM). After a stint as vice president of wetsuits and accessories at Quiksilver, Farnsworth is now Sales Manager for Skullcandy. 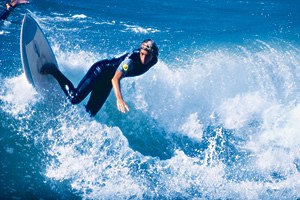 Scott on the north side of the Huntington Beach Pier riding a Carl Hayward surfboard for whom he was a longtime teamrider. Scott inducted Carl to the Surfing Walk of Fame as a Local Hero posthumously in 2005 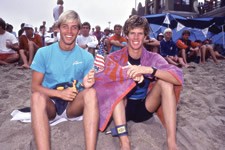 Scott and Mike Parsons '84: Scott and teammate Mike Parsons leading team USA to the gold medal in the 1984 ISA Surfing Games in Huntington Beach. Scott won the individual gold medal along with Surfing Walk of Fame inductee Janice Aragon who won the gold in the women’s division.