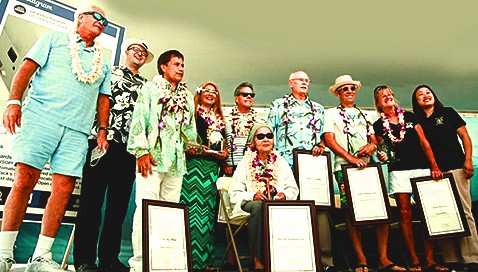 Our annual ceremony to honor those individuals who have made significant contributions to the sport and culture of surfing was held on 10am on Thursday, September 23rd, 2021 in front of Jack’s Surfboards (located on the corner of PCH and Main Street). This is a free event!

2021 SURFING WALK OF FAME INDUCTEES ANNOUNCED
Moore, Hardman, Tabeling, Lear, Swarts, Downey, Brown and Abdelfattah to be honored at 27th anniversary ceremony in Huntington Beach
Huntington Beach, CA – September 13, 2021 – The votes have been tallied and fresh crop of legendary wave riders will once again be forever enshrined in surfing’s history books on September 23, 2021 at 10:00am in Huntington Beach, California. Through a selection ballot, a host of respected surf industry veterans, former professionals, current inductees and surf journalists narrowed down a field of hundreds of candidates to name the 2021 Surfing Walk of Fame’s honorees in their respective categories: Carissa Moore (Woman of the Year), Damien Hardman (Surf Champion), Mike Tabeling (Surf Pioneer), Cecil Lear & Hoppy Swarts (Surf Culture), Mike Downey (Local Hero) and Tim Brown & Ron Abdelfattah (Honor Roll).
After the pandemic forced the 2020 induction to be cancelled, the Surfing Walk of Fame is roaring back this fall during the U.S. Open of Surfing while celebrating 27 years of honoring surf legends in Huntington Beach, California. The Surfing Walk of Fame is the only tribunal in surfing to award specific categories as well as require a 10-year margin since the commemorating achievement. This year’s recipients will be cemented alongside past inductees, earning their immortal place in the pavement on the corner of PCH and Main Street, directly across from the famous pier in Surf City USA.
“After 18 months of world-wide closures and uncertainty, this year’s class of Surfing Walk of Fame inductees is incredible,” said John Etheridge, Surfing Walk of Fame Chairman of the Board. “Our goal to celebrate surfing, surfers, surf culture and its history has never been more completely represented than it is in this class. In a year where we’ve lost so many inductees like Greg Noll, Ben Aipa and Rick ‘Rockin Fig’ Fignetti, we’re so proud to honor this year’s group of honorees.”
Headlining the group in the Women of the Year category is surfing’s first-ever Olympic gold medalist Carissa Moore. As Hawaii’s four-time World Champion, it’s highly-likely that the top-ranked Moore could achieve her fifth world title at the WSL Finals at Trestles in the weeks leading up to induction day.
Earning the Surf Champion induction is Australian Damien Hardman, a two-time World Champion (1987, 1991). After tallying 19 event wins throughout his career, he was the first male surfer to win seven events in one season.
The East Coast’s first international-caliber pro surfer Mike Tabeling will be commemorated in the Surf Pioneer category. Tabeling was the first Florida surfer to string together a series of impressive contest results throughout the late 1960s and early 1970s, with his runner-up finish at the 1968 U.S. Championships catapulting him to stardom.
A duo of legendary East Coasters will share the honors for the always-colorful Surf Culture plaque. Lewis Earl “Hoppy” Swarts, founding president of the United States Surfing Association (USSA) in 1961, actually mentored his co-inductee Cecil Lear to launch the Eastern Surfing Association (ESA). And both legends will sit side-by-side as they’re immortalized with stones on induction day.
Chiropractor to the stars Dr. Tim Brown and Surfing Walk of Fame patron Ron Abdelfattah from Jack’s Surfboards will be co-recognized in the Honor Roll category. While longtime Huntington surf contest fixture Mike Downing earns the Local Hero achievement.
Here are the voting criterions used to decide each division:
SURF CHAMPION – Nominees must have held a world championship and/or world-class event titles specific to Huntington Beach.
SURF PIONEER – Nominees achieved surfing fame as a respected surfer or pioneer in the time before major championship; candidates must either be at least 50 years old or deceased.
SURF CULTURE – Inductees are nominated from the arts and/or industry, and must have helped create and define surfing culture.
WOMAN OF THE YEAR – Any female who meets the qualification in any of the four categories: surf champion, surfing culture, local hero, or surfing pioneer.
LOCAL HERO – Nominees must have resided in Huntington Beach for at least 10 years, graduated from Huntington Union School District, been a finalist in the surf champion category, contributed to Huntington surfing culture, been a surfing pioneer in the city or a past champion at the annual Huntington Beach City Championships.
HONOR ROLL – Recipients of the honor roll award deserve recognition du to their important contributions to the sport of surfing and its culture, but hey do not qualify under the specific guidelines of the other five walk of fame categories. The honor roll is the only category chose by the Walk of Fame Board of Directors.
This year’s honorary induction ceremony will take place during the U.S. Open of Surfing outside of Jack’s Surfboards in Huntington Beach at 10:00am on Thursday, September 23, 2021.
Past recipients of the Surfing Walk of Fame honors include Duke Kahanamoku, Kelly Slater, Lisa Anderson, Tom Curren, Bruce Brown, Eddie Aikau, Shaun Tomson, Mark Richards, Peter “PT” Townend, Gerry Lopez, Layne Beachley and more.
Press contact:
Peter “PT” Townend
activempire@aol.com
714.742.0355
Mike Cianciulli
mikechinch@gmail.com
805-704-1484

The Surfing Walk of Fame 2016 Induction on July 28th. Video Production courtesy of by Matt Liffreing.

CLICK HERE TO VIEW OUR PAST INDUCTION DAY PHOTO GALLERY!