"Soul Surfer" and major frontrunner in the shortboard revolution 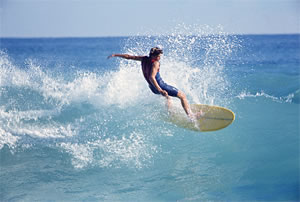 Wayne Lynch was often viewed as a “soul surfer” but could just as easily be known for his performances in the competition singlet. A dynamic Australian goofyfoot, Lynch was a major frontrunner in the shortboard revolution. While most guys during the late-’60s and early-’70s were walking to the nose on 10-foot surfboards, Lynch was riding seven-foot boards and turning up and down the face.

Born in 1952 in Victoria, Australia, Lynch began surfing at age 10. After turning heads at the local beaches for much of his youth, by 1965 Lynch had won the first of six consecutive Victoria state titles. But his real coming out party occurred in 1969. Lynch’s natural ability hit the big screen during his futuristic hotdogging scenes in the film Evolution. And even though the film costarred
Nat Young and Ted Spencer, it is most notably remembered for Lynch’s surfing.

After being bedridden due to a motorcycle accident for nearly six months, Lynch returned to the water in 1974 where he continued to compete part-time for the next three years. Lynch continues to live a quiet life in Australia, shaping surfboards as he has since the early ’70s. He is married and has two children.